Vietnamese Education - With the achievements of exponential international publication in recent years, Ton Duc Thang University will surely make a great leap in this ranking.

On May 16th, 2020, the University Ranking by Academic Performance (URAP) announced the ranking of universities by Field Based Ranking in 2020.

According to the results of this table, 10 fields/field groups of Ton Duc Thang University have been ranked in the top 400, 500, and some in the top 600-900 in the world. Specifically:

All of the above fields/field groups of TDTU are ranked No. 1 in Vietnam, except Physical Sciences which is ranked 2nd after Vietnam National University, Hanoi.

In October 2019, U.S. Magazine News & World Report of the United States announced the results of the Best Global Universities Rankings 2020.

Particularly, Engineering of Ton Duc Thang University was ranked 395th among the best universities in the world. This is also the highest ranking of majors ranked by US News & World Report for a university in Vietnam so far. 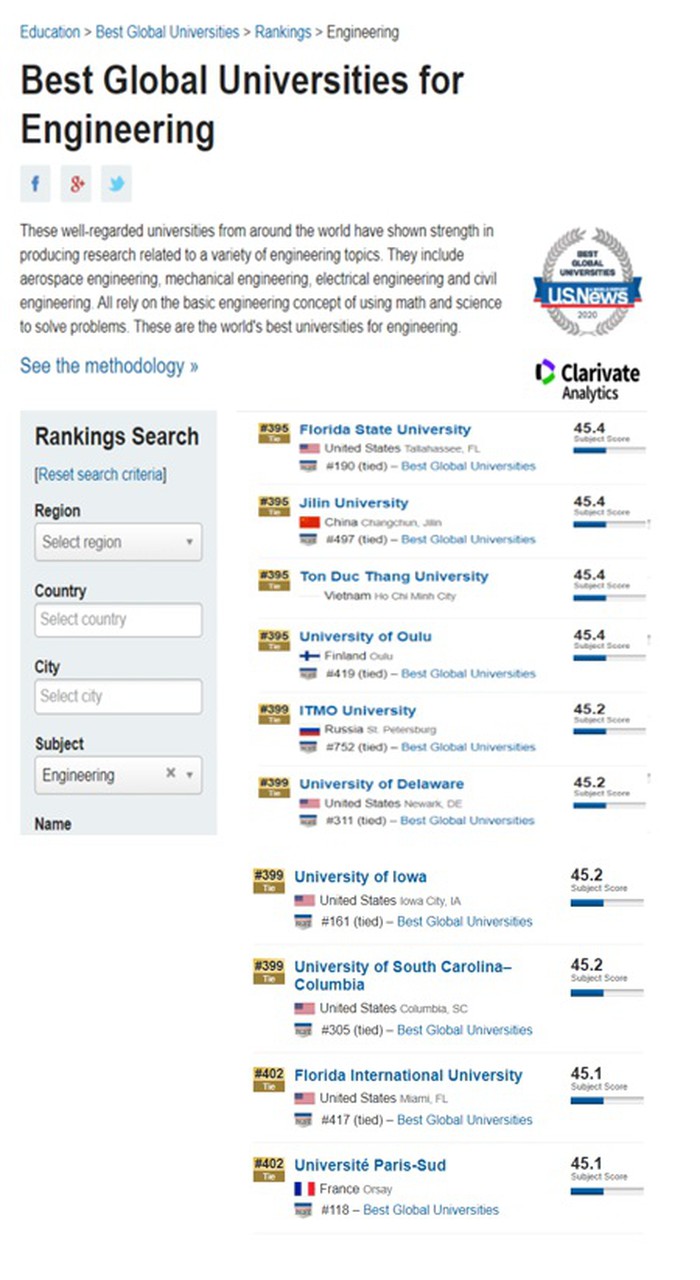 This is the sixth time US News & World Report has published the ranking of the world’s best universities and fields/field groups. It has been helping international students have accurate information about educational institutions around the world to decide on studying at foreign universities according to the increasing needs of learners all over the world.

US News & World Report is one of the world’s earliest and most prestigious University Rankings. Since 1983, this Magazine has published rankings for US universities and colleges.

In the last 6 years, this Magazine has started a global university ranking to help US universities make a comparison between the quality of domestic universities and the rest of the world; as well as giving US students the information to select which college is appropriate once they intend to study undergraduate or graduate programs outside the United States.

This Magazine evaluates and ranks global universities based on analysis from the scientific database provided by Clarivate Analytics InCites Corporation. This ranking is similar to URAP and ARWU, which is not based on individual votes or subjective market surveys.

In terms of methodology, Best Global Universities evaluates universities with 13 completely objective criteria and focuses on research reputation (through surveys) and research quality through the scientific data analysis published in the Clarivate Analytics InCites database. At the same time, the evaluation of research reputation is also conducted by Clarivate Analytics InCites.

In particular, the hard criterion is that only universities with 1,500 articles published on WoS for 5 consecutive years up to the time of data closure will be considered. The table published in 2019 takes the continuous data of 5 years from 2013 to 2017.

For this reason, Ton Duc Thang University, although still included in this table, has no specific ranking because the total number of international publications on ISI of this University from 2013 to 2017 has not reached 1500 articles. However, this university is still in the table because there are excellent fields.

According to Associate Professor Vo Van Lai, with the achievements of exponential international publication in recent years, as well as the outstanding scientific reputation, Ton Duc Thang University will surely make a great leap in this ranking in the next few years.