Flooding and rainwater drainage have always been difficult problems, not only in terms of technical aspects due to the complexity and lack of infrastructure synchronization as well as investment capital in construction projects, but also in terms of managing and operating the projects in the current conditions in most cities in Vietnam. Urban expansion has led to a number of former canals being filled; and the process of land reclamation with concrete during urban embellishment also changed the soil cover coefficient, reducing the amount of water infiltration and natural water storage area. This results in a rapid increase in drainage and direct overflow coefficients, making flooding caused by rain more and more complex.

One of the active solutions to reduce the level of flooding caused by rain is to build reservoirs or regulating canals to capture rainwater and release water, especially in regions with large areas and low elevations. For regulation, natural reservoirs are often utilized in cities to reduce construction costs, and in some special cases, artificial ones are also built. Basically, reservoirs are responsible for regulating the flow of rainwater naturally to prevent flooding, and to reduce the cost of managing the drainage system. In addition, they are used for irrigation, landscaping, microclimate improvement and environmental protection. The solution to use the urban reservoirs has been implemented in many big cities such as Hanoi, Hai Phong and Ho Chi Minh, with the ratio of area per total urban area differing from one another, depending on the natural conditions and geographical location of the city. In particular, the area of regulating reservoirs in Hanoi is about 952.9 ha, accounting for 5.56% [1], in Hai Phong, it is about 66.5 ha, accounting for 0.27%   , and in Ho Chi Minh City, there will be 103 lakes with a total area of 875 ha .

The main campus of Ton Duc Thang University (TDTU) is built on a land with a total area of nearly 30 hectares, adjacent to the modern urban area of Phu My Hung, District 7, Ho Chi Minh City. In the master plan of this campus, the separate areas are surrounded and connected to each other through a system of 3 natural canals - the area in front of Ong Bay Canal is Zone 1 with blocks A, B, C, D, E, F, G;  Zone 2 with the stadium, football ground, dormitory, swimming pool, etc. is placed between Ong Bay Canal and Tu Dinh Canal and the area between Tu Dinh Canal and Ong Lon River is Zone 3 with the existence of Vietnam-Finland International School. This network of natural canals inside the campus not only enhances the beauty of the landscape and expands green space, but also acts as "regulating lakes" carrying out the function of drainage and flood control. Thanks to this connection, the management of drainage system in TDTU campus, especially in the rainy season, always ensures high efficiency and local flooding does not happen at all. In addition, the utilization of these natural canals as a component in the internal drainage system also helps to reduce the cost of managing the drainage system, while limiting the environmental impacts due to the drainage of surface overflow. To ensure safety and avoid erosion, the University has built structures of stone and concrete embankments and protection corridors along the two banks of the canal. The canal water is monitored for quality and the self-cleaning function is improved through the installation of surface water fountains to enhance the dissolved oxygen content in the water. 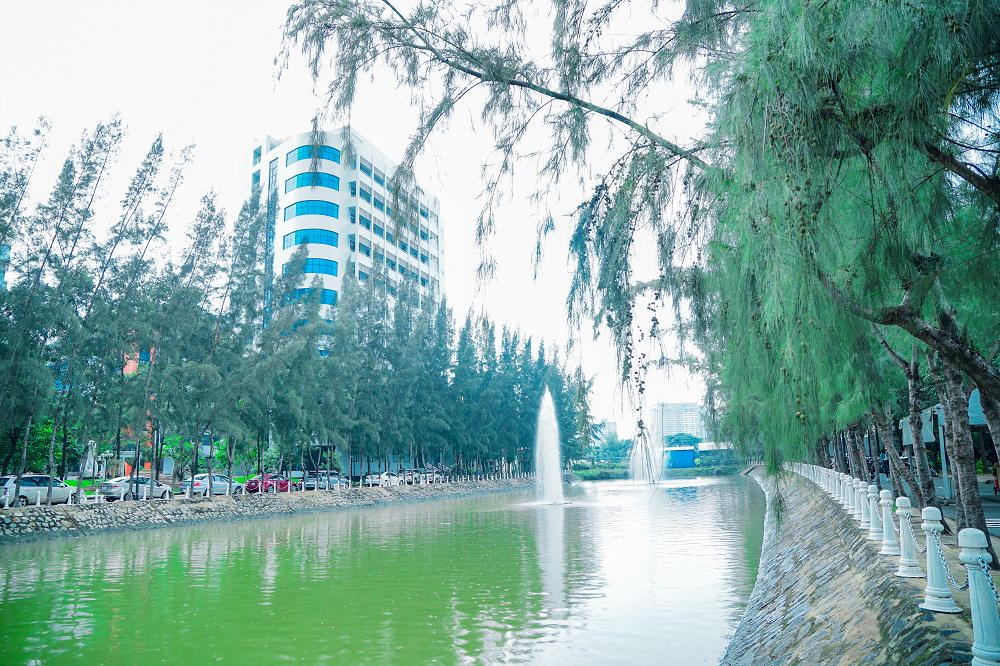 It can be acknowledged that the planning activities of Tan Phong Campus at TDTU which include maintenance and renovation without breaking the flow regime or blocking the existing natural canal system is one of the proper and effective construction plans that ensure a sustainable connection between development, construction expansion and nature conservation. Therefore, TDTU deserves to be the top clean and green university in Ho Chi Minh City and among the TOP 200 most sustainable development universities in the world.

1. Luu Van Quan, Nguyen Tuan Anh, Using regulating reservoirs in the rainwater drainage in some urban areas of Northern Delta in Vietnam, Journal of Hydraulic Science and Environment – No. 41 (6/2013)
2. Decision No. 752 / QD-TTg of the Prime Minister approving the general plan of HCMC drainage system until 2020