Ton Duc Thang University (TDTU) has just been ranked in the TOP 400 and within the 500 best universities by Academic Ranking of World Universities (ARWU), which is the world's most reputable university ranking system, based on various academic subjects in 2020. 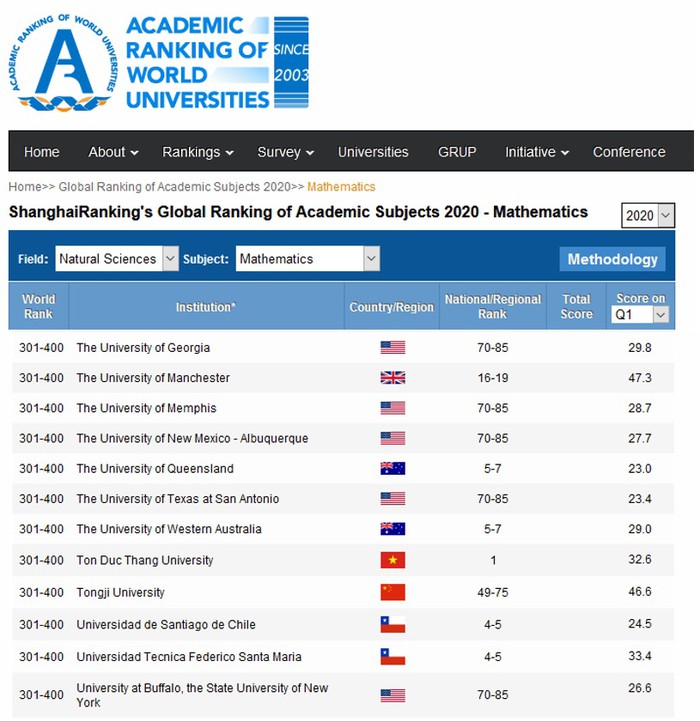 Moreover, according to the ARWU Global Ranking of Academic Subjects 2020 data, TDTU has been ranked in top 401-500 in the world and top 1 in Vietnam in both Electrical & Electronic Engineering and Computer Science & Engineering.

TDTU's Electrical and Electronics Engineering have been classified in the top position alongside prestigious universities such as Texas Tech University, Universiti Teknologi Malaysia, and University of Illinois. 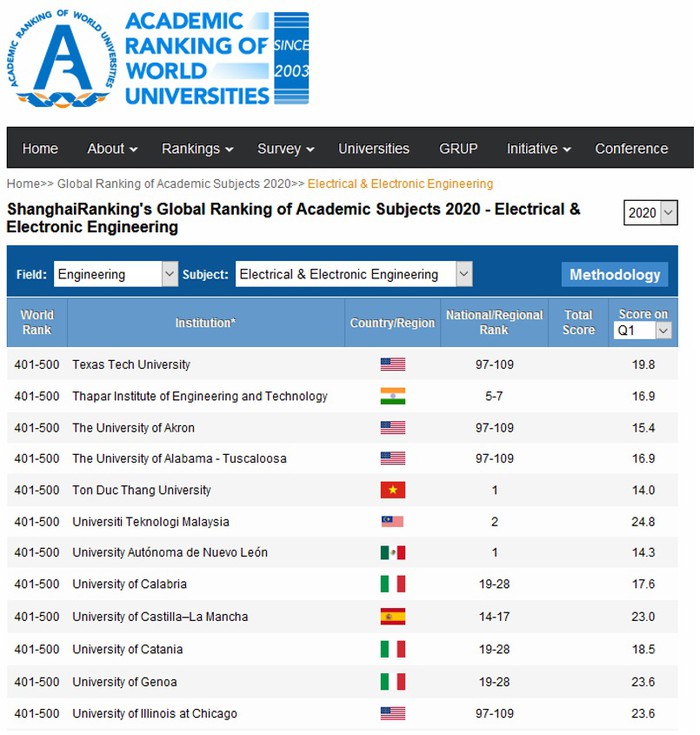 And in the Computer Science, TDTU is ranked in the same group with other prestigious universities including The George Washington University, USA; Stockholm University, Sweden, University of Bordeaux, France; and University of Barcelona, Spain. These are long-standing universities which have been heavily invested in by the government.

ARWU is the most prestigious, objective and challenging university ranking organization today and has 05 criteria:

- Q1: Number of subject-related articles published in journals belonging to the list of 25% of the most prestigious scientific journals in that field on the Web of Sciences (ISI).

- CNCI: the ratio of citation of papers published by an institution in an Academic Subject is collected from InCites database.

- IC: the number of publications with at least 2 authors from 2 different countries.

- Top: the number of papers published in Top Journals in an Academic Subject according to the Shanghai Ranking’s Academic Excellence Survey.

- Award: the total number of the staff of an institution winning a significant award in an Academic Subject

The highlight of ARWU is in the objectivity of the assessment. ARWU does not rely on subjective data provided by the universities themselves. More importantly unlike other university ranking systems it does not form its basis on experts’ own subjective opinions, which means ARWU collects data on objective databases around the world.

Learners around the world often rely on these prestigious rankings to find schools and scholarships, hoping for a successful future. As, TDTU has been ranked in Top 400 and 500 in three academic subjects, learners can choose to study here at a cost of only one-twentieth of other universities’ tuition fee in developed countries in the world (but in fact, the quality is just as high at TDTU).

TDTU is the leading university following the path of autonomy in Vietnam. Thanks to this autonomic and self-responsible mechanism, after just 22 years of establishment and development, TDTU has been ranked No.1 in Vietnam and in the TOP 1000 best universities in the world in 2019 by both ARWU and URAP, which are the two most objective ranking systems, although it is not funded by the state for regular spending and capital construction investment. This is the most eloquent evidence for the superiority and promptness of the policy of university autonomy in Vietnam, so that the Communist Party and the Government will be more drastic in directing all levels to support university autonomy; and remove all current laws and barriers to university autonomy.